"No Matter have put themselves on the map as one of N.Ireland's premier underground punk acts" - Small Music Scene 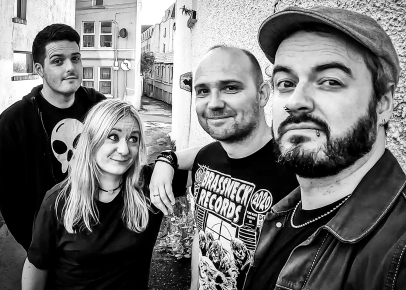 They’ve gained a reputation for being extremely hardworking, having toured extensively across the UK, Ireland and Europe, with several multiple country tours under their belts and have begun reaching outside Europe, playing shows in Canada with dates elsewhere worldwide on the cards. They have also made appearances at several acclaimed punk festivals, including two appearances at Punk Rock Holiday in Slovenia (in ’16 and ’19), Pouzza Fest in Montreal, Canada, and Manchester Punk Fest in the UK, which were headlined by numerous legendary punk rock bands including Nofx, The Descendents, and Propagandhi.

Their last full release, “Excess Baggage” was reviewed on punknews.org as being ranked #8 in a “Best of 2019” list, among bands such as Bad Religion, Sum 41, blink 182 and Lagwagon, whilst their previous release “Ill Advised” was also reviewed by punknews.org, with one of their editors calling it his “favourite pop-punk album of the last twenty-five years”, giving it a 9 out of 10 rating. The first track of this release 'Migraine' has now reached over 70,000 organic plays on Apple Music whilst another track El Bait received airplay on BBC ATL.

The new album, due for release on July 1st, is entitled "Bad Chemistry", and will be released on 2 vinyl variants by Brassneck Records (UK), on CD by Waterslide Records (Japan) and online across all digital media outlets. The album's vinyl pre-order launch coincides with the release of "Shitegeist" on June 3rd. No Matter has released two singles from Bad Chemistry ("It's Boring' and 'In Spite of You') to significant acclaim, receiving numerous playlist placements, online/printed press coverage and radio plays including a feature in the Irish News and airtime on BBC Introducing with the former calling In Spite of You "a fast-paced catchy crunchy singalong" and the latter saying of the band "One to watch... 10/10!" The new 14 track album has already been referred to as "their best work to date", and "an absolutely belting album".